I'm not sure if I should talk about Mamasita. The logic goes like this, if less people know about it, the greater the chance of getting a seat immediately.

To be honest, I am not quite sure what draws in the crowd at Mamasita, but I suppose it is one of those places where you do indeed think WTF, but still consider revisiting...again and again. I really don't know.

Mamasita, a convival mexican restaurant / bar that is so loud that you really need to shout to have any sort of conversation with your fellow diners.To give you some indication of how freaken busy this place is, I arrived at around 5.40PM and the place was full. In fact it was so damn full, there was a queue right down the stairs, and funnily, I was right at the bottom.It wasn't even 6pm yet!!!, and by 6pm, we were told there was going to be a 20-25 minute wait (they weren't exaggerating). I was partially hoping that they would tell us "give me your number and we'll call you", in which case, I would have had no hesitation in popping down to bar lourinha to try my luck! ha ha ! 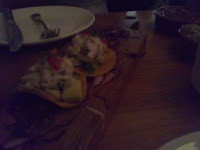 Anyway, when we were finally ushered to the bar, the waiter said "order a drink at the bar and we'll move you to a table"...mind you, we were sort of standing behind other diners...who were actually eating at the bar. I mean...is this a restaurant or is this a bar? Because I'm not going to edge my way in whilst people are eating to order my booze...if they weren't eating, then it's on for young on old...don't you agree?

Notwithstanding ALL my ranting, this place isn't that bad. It's just so so damn busy. When we were finally given a table, we decided that we would not repeat our mistakes from our last visit where, lets just say, we were a bit over tortillas. There is only so much tortillas anyone can eat. 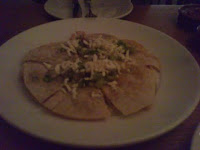 Like almost everyone else, we ordered some tacos (they're real tacos) with salsa and guacamole. The salsa and guacamole really are that good! Next were tostadillas, with crab meat and stuff...and habanero chillis which we asked to be separated. I'm sorry ladies and gentlemen, I'm not that brave to stuff my face with habanero. They're one of the hottest chillis out there (2 x hotter than the birds eye on the Scoville scale!). 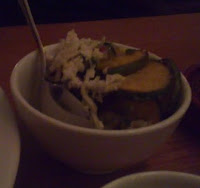 We continued on with a chicken quesadilla which was good, but as I said, only so much tortillas anyone can eat. We ordered some more substantial dishes such as a chicken mole, and a braised goat of some sort. The chicken mole was good, different. The goat was a miss..a little too dry and not really braised at all. 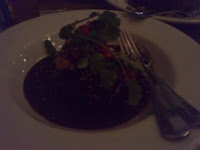 We also ordered a side of plantains which I expected to be far sweeter. To me, it was a little starchy, and much more of an acquired taste than expected. The first mouthful was good, the second tolerable, by the third I decided I had enough.

Overall, I would go back to mamasita, not because it's blown me away, but just for the novelty of actually getting a seat...no in reality, because there isn't anywhere else that I know of that would serve mexican besides cheese, tacos and corn (although, if you're into that stuff, they have that there too...). 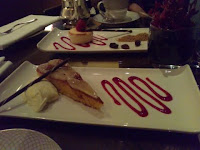 We didn't try for desserts because the waitress asked twice if we were still going...*hint, get out, we want the table*. So we tried MoVida...no luck...Ezard...no luck. I really don't love end of week dining because every single place is just so busy. About an hour of walking later, we found ourselves at Aria at the Langham. Nice quiet and relaxing finish to the week. A surprise in desserts too, as expectations weren't high...

Dave
Melbourne, Victoria, Australia
Just a guy trying to live a dream, however inverted it may seem. An account on the duality of decisions, circumstance and life.